The Falconers tend to be very fragile, trading toughness for speed and manoeuvrability, so choosing exactly the right moment to attack is key. While the Falconers lean towards getting take outs, aided by their strong ranged damage capability, their raw speed allows them to keep a potent goal threat on the pitch.

The Falconers are a Minor Guild tied to the Hunter’s Guild by strange moonlit pacts and oaths. As a Minor Guild, some of their players can crossover and play for the Hunters too. The Falconers are a Guild with a focus on ranged damage, using their magnificent hunting birds to strike at their opponents from a distance. They have many strong abilities to attack from range and melt away into the forests, but you must beware.

The opposing team must fight under a sky darkened by their deadly wings, constantly harassed and buffeted, never given a second’s rest. The Falconers are strong in the mid-late game, they like a bit of time to chip their opponent’s health down from range before committing.

The Falconers are a team for coaches who like keeping their foes at arm’s length and dictating the flow and speed of the game. They’re also the team for anyone who loves attacking their enemies with giant birds of prey! 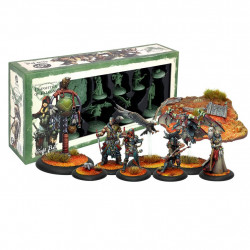