The Farmer’s Guild is a team of ragtag misfits welded together by their coach, Honour. They’re a story of rags to riches, the underdogs in a world where the big dogs are very big indeed.

The Farmers rely on their unique harvest markers, placed by their Planters. These rich, nutritious harvest markers can be used by the Reapers of the team to gain powerful bonuses and effects! The team can also use them to get extra influence, giving them a powerful resource that no other team has access to.

The Farmers are strong takeout focused team, with access to plenty of team support and buffing abilities to keep them in the fight. They have extremely reliable low to midrange damage, but their damage doesn’t scale quite as well as teams like the Butchers, making them very reliable overall but meaning they don’t gain as much if their dice run hot. They’re generally not particularly good at handling the ball, but they can absolutely score goals if they need to. They’re strong in the late game, as their high health pools, reliability, and easy momentum generation allows them to keep ploughing their furrow when other guilds start to run out of steam.

The Farmer’s Guild are for coaches who want plenty of team support abilities and very reliable damage. They’re also a guild for anyone who likes playing the good guys! 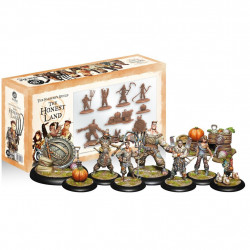